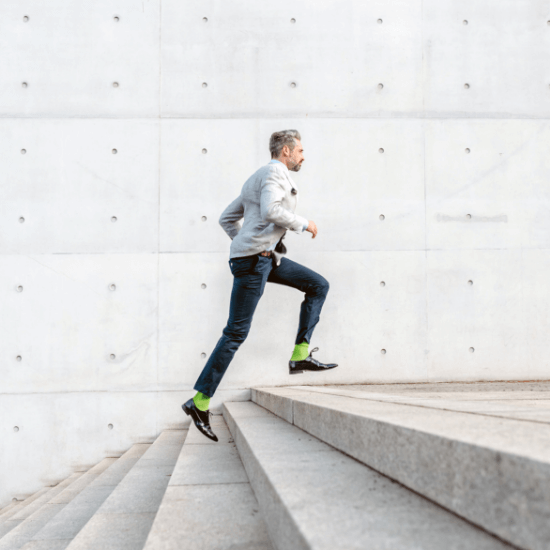 Just like the years before, we took some time to have a deeper look at our applications. To give you an impression about this year’s application phase for circular economy startup ideas, we would like to share some insights about here.

This year we were reached by an incredible amount of 274 applications. Although the Green Startup Monitor states that the number of startup foundations has been declining for years, green startups are still on the rise and account for about a quarter of all startups. Since we kicked off the Green Alley Award in 2014, the number of applications has been increasing from year to year. This is proof of a steadily growing interest in environmental themes over the last years. Whereas the number of applications was almost the same in 2017 (205) and 2018 (215), it has now increased by 27%. Only addressing Germany, Austria and Switzerland at the beginning, we have extended our scope to all of Europe. For the first time we received applications from Malta.

Our 2019 applicants came from more than 30 different European countries, covering a vast geographical spectrum. From Sweden in the north to Greece in the south and from Portugal to Ukraine in the east, almost every region was included. Just like last year, most applications came from Germany – making up one quarter of all applicants. Even though Berlin is still the number one startup hub, smaller cities are on the rise: In 2018 German startups came from 28 different cities, this year we counted 39. According to the Global Startup Ecosystem Report 2019 Berlin has lost a few places in the ranking of the world’s most important startup hubs which could be reason for so many other German cities to appear in our statistics. Just like in 2018, the UK made up about 12% with half of the applications coming from London, followed by Spain with 10%. Spain has now even outpaced Italy, which ranks fourth with about 7% of all incoming applications. 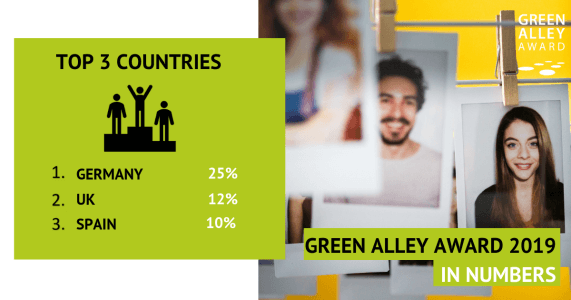 Most startup solutions fell into the category of waste prevention (38%), followed by recycling (36%) and digital circular economy solutions (26%). Although we can observe that environmental issues are now attracting more attention, the waste crisis does not yet seem to have been resolved. This makes the contributions and ideas of our startups to move one step further towards a circular economy even more important.

Let’s have a look at what our applicants have to offer. Compared to last year, the numbers have barely changed. Products still make up more than half of the offers, while 28% offer a service and 15% a technology. Looking at the CEOs’ gender, we still have more men-led startups (68%) than women-led (32%). Even though the number of female CEO’s has slightly decreased by one percentage point compared to last year, it is still higher than the average. According to the Green Startup Monitor 2018, women usually make up only about 18% of green leaders and even less when it comes to non-green startups. From all the applications that reached us, about 64% already had their company incorporated. 176 businesses also indicated their date of foundation. Here it shows that about 67% of these startups had been founded within the last three years. 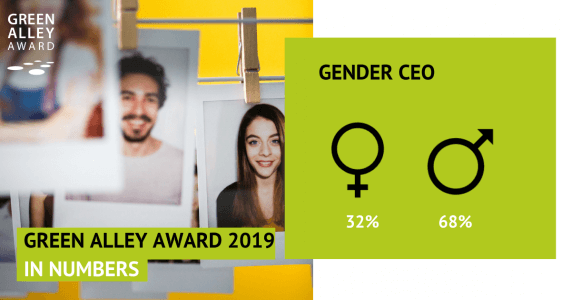 The Green Alley Award team thanks all applicants and our supporters who spread the word about the award! We will now take a close look at the ideas that reached us and be back to let you know who made it to the finals. Stay curious!